In The Spotlight – PT Savanna Ranch

PT Savanna Ranch has been a bittersweet family journey into raising Savanna goats.  It began with my brother Paul, a Savanna breeder (PJT farm), being diagnosed with terminal cancer.

I was working a stressful job as Vice President of an automobile aftermarket car care product company at the same time I was helping Paul.  It was during these trips to the doctors while he was receiving cancer treatments, that I would listen to Paul’s stories about the history of his Savanna goats. These stories were very relaxing and rewarding to me during this stressful time. He had concentrated on building his savanna herd from the actual South African born savannas that were on the east coast. His dream, and I quote, “To raise the best damn goats in this part of the country”.  He asked me to take some of his best and favorite goats and keep them for him during his treatments.  He knew I would fall in love with them as he did.  He was right.  After his passing, my mission became to continue his dream.  Hence, the beginning of PT Savanna Ranch, appropriately named after my brother, Paul Traughber. 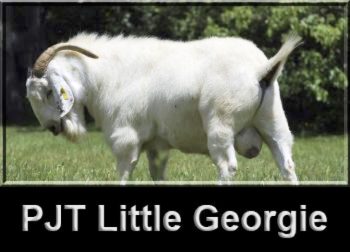 Things began to happen quickly for Bob and I, a post on Facebook by Jamie Ryan noted that Jerry Webb, an early savanna breeder (NJW), had goats for sale.  I jumped at an opportunity to meet and hopefully purchase from him. I recognized Jerry’s name as Paul had spoken about Jerry being one of the older breeders.  Jerry had a closed herd in Virginia built from several of the imported savannas.  I was fortunate that Jerry trusted me with the remainder of his NJW herd.

Jerry had made a heart wrenching decision to retire from goats due to health issues.  I now had PJT and NJW as part of my foundation. This post by Jamie also led to meeting both Jamie Ryan and Trevor Ballif.  I knew of their genetics work with rare import semen over older DNA verified does.

This proved to be an even further asset by my purchase of WWE05’s Cadillac from their program.  He is a son of the famous savanna buck WW E05. The addition of this old bloodline into our herd will help diversify with our older genetics.   The kids out of “Caddy”  have been very impressive.  The dark pigment, large frame, and roman noses have been a standout.  I hope to release a few for sale in the next few months.

A portion of my husband’s Black Angus Cattle farm has now been converted over to accommodate a herd of Savanna goats. My plan is to slowly convert him from cattle to goats.

Our mission is to continue to build old bloodline full-blood  Savannas with DNA parentage verification.